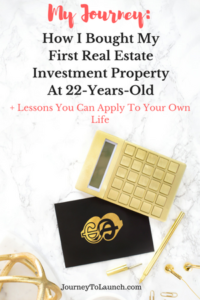 The studio was in a new high-rise condominium development that had yet to be constructed. Unbeknownst to me, buying this property was one of the most dangerous but rewarding financial decisions I’d ever make.

As a senior in college, I became interested in real estate investing. I’d met a couple of older folks who owned multiple properties in my neighborhood. These unassuming “neighborhood millionaires” as I like to call them, had bought properties in the Fort Greene and Bed-Stuy areas of Brooklyn in the 80’s and early 90’s. Back in the day, you couldn’t pay people to live and buy something in those areas. Violence and abandoned properties made these neighborhoods unsafe and undesirable.

However, by the time I was ready to buy something in 2005, the home prices in these same neighborhoods had appreciated immensely. Those that had the foresight to buy and invest back in the early days became real estate rich.

My own grandmother became a real estate mogul without even trying. She’d bought a three family home pre-construction in the heart of Fort Green with no strategic plans to become a real estate investor. My grandma just wanted a place to call her own. Yet, years later, she’d also seen a tremendous increase in her home value.

Growing up and watching the neighborhood transform and seeing people build wealth through home ownership sparked my love for real estate.

I thought, if my grandmother, an immigrant who came to this country with nothing to her name and worked as a nanny could find success in real estate,  surely I could too.

With that mindset, I was determined to buy my first multifamily investment property.

Throughout college, I’d secured a well-paying internship at a Fortune 500 company. I saved approximately 90% of my income while my fellow interns spent most of their new found wealth on going out, clothes and gadgets. It’s not that I didn’t splurge here and there, I just made saving a priority.

Initially, I didn’t know what I was saving for. I just knew that one day it would benefit me to have as much cash saved up in the bank as possible.  The money saved from my internship would eventually become what I’d use for my down payment.

I just couldn’t afford anything.

Discouraged, I thought I’d never be able to own property in the neighborhood I’d grown up in and loved. I’d even considered buying something in New Jersey since price points were more affordable.

Then, one day while I was searching for properties online, I came across an advertisement for a new luxurious high-rise condominium development in DUMBO, Brooklyn.

Even though I’d grown up in Brooklyn for most of my life, I was not familiar with the area of DUMBO. Truthfully, at 22-years-old, I’d never been to the area despite the fact that it was only 2 miles from where I lived. It wasn’t the DUMBO full of amenities that everyone knows and loves today. Back then, it was just a location extremely close to Manhattan with a lot of promise.

Studios and one-bedrooms at this new development ranged from mid $300K to $500K, which was still a little bit too expensive for a soon to be college graduate like myself. However, they were relatively much more affordable than the multi-family houses I’d been looking to buy.

I decided that I would visit the sales office and walk around the neighborhood to get a better feel for the development and the area. When I arrived at the leasing office, the developer had an impressive plan for the building and showed all the great plans for the location. I immediately became a believer in the vision for DUMBO and fell in love with the prospect of owning something.

Of all the apartments listed for sale, the only ones that I could barely “afford” were the studio apartments. Knowing that I had to act fast in order to secure a unit, I chose the lowest priced studio apartment available. I put down 10% of the purchase price and officially went into contract.

Before I knew it, it was all set, I was going to own a studio apartment in the up and coming neighborhood of DUMBO!

When the excitement wore off and reality hit, I quickly realized that I may have bitten off more than I could chew.

Could I really afford this condo unit?

Not only did I not have any money left (I’d used it all on the down payment), I would still need to save an additional 10% down payment, closing costs and qualify for a mortgage in order to seal the deal.

Luckily for me, the building wasn’t set to be complete for another two years. The developers hadn’t even broken ground yet when I put my deposit down.

While it was torture to have to wait another two years for the building to be complete, the additional time was exactly what I needed to save more money.

Upon graduation, I was hired full time by the company I’d interned for throughout college. It was reassuring to know that I would have a stable income to rely on once the building was completed. I was also able to live with my mom during that time which helped me save money on rent. It was during these two years of the building’s construction, that I worked hard, lived below my means and became even more of a super saver.

I knew in the beginning of my working career that my paycheck would only be just enough to cover the mortgage. I also knew that I would earn more income over time as and eventually, I’d be able to widen the gap between my income and living expenses.

Until then, I planned to save as much as possible while the building was in construction. I knew that my savings would have to cover the majority of my living expenses once I moved in.

Timing was on my side again when it finally came time to close on my condo in 2007. When I started to apply for mortgages, the real estate bubble was at an all-time frenzy. I didn’t have to show proof of income to get approved for my loan.  I was one of the many people that got approved for a mortgage they couldn’t afford.  Nonetheless, I was able to close and move into my condo.

Interestingly enough, by the time construction was completed, my unit had appreciated almost 20% above the purchase price. I’d made money on the deal before I even moved in. So while I was taking on a huge risk with my income just barely being able to cover the mortgage, I was fairly confident that in the worst case scenario, I could sell or rent the condo out. 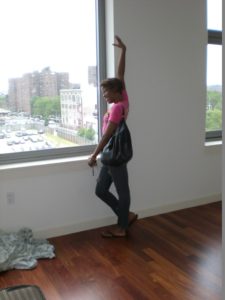 Me when I first moved into my DUMBO condo

Fast forward a couple years later, just as I’d expected, my income finally got to the point where I was able to cover the mortgage and start saving again.  Almost 12 years later, the condo has almost doubled in value.  And while many neighborhoods have seen property values rise and decline since the real estate crisis of the 2000’s, DUMBO has only thrived. It’s even considered “one of the most expensive place to live in Brooklyn” by NY TIMES.

I no longer live in my sweet little condo in DUMBO but I still own it and rent it out. The rent more than covers the mortgage and other related rental expenses. The extra cash flow from the condo also helps to pay the additional amount we pay on our primary mortgage.

Looking back, the following factors contributed to my success:

Perhaps you’re not working with the same deck of cards that I was dealt. Don’t be discouraged. While you can’t control the external factors, such as the economy or the ability or willingness of family to help, there are a lot of things you can control. How you view yourself, your commitment to better saving and your ability to adapt to change are all things you can focus on improving.

All the factors mentioned above along with youthful optimism allowed me to take on the biggest risk of my life. Yet this big risk had a big reward. The purchase of my first real estate property at 22-years-old ultimately jump-started me on my journey to financial freedom and wealth.

If you loved this, you may love these articles on My Journey / Real Estate