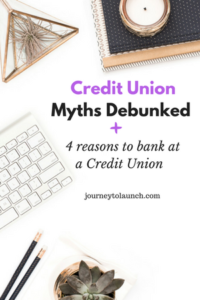 When Melanie from the blog Dear Debt reached out and invited me to the 2017 Co-op Think Influencer kickoff event that she and Tonya Rapley of My Fab Finance were hosting back in May, I was ecstatic. The Co-op Think Conference is an event bringing professionals in the Credit Union industry together. Not only would I get the chance to network with fellow bloggers in the personal finance space, I’d get to learn about something I knew very little about, Credit Unions.

In the past, I’ve only banked with Traditional Banks. While I was aware that Credit Unions existed, I didn’t know much about them.

A few weeks after the event, I got the chance to speak with Samira Rajan, CEO of Brooklyn Cooperative FCU & CO-OP Financial Services Member. Through our conversation and in doing more research, I was able to “debunk” some of my own Credit Union myths and learn the benefits of banking with Credit Unions.

Essentially, Credit Unions are at home personal banking institutions. They differ from Traditional Banks because they are not for profit organizations, run by a volunteer board. Those that bank with a Credit Union are members and owners who elect their board. Credit Unions see themselves as different from mainstream banks, with a mission to be “community-oriented” and “serve people, not profit. (wikepedia)

Here are some of my previous Credit Union myths, debunked:

Credit Unions are hard to join

I always assumed that to become a member of a Credit Union, you had to work for the government or be under a certain income threshold. In reality, not all Credit Unions require you to be affiliated with the government or have an income limit. In some cases, if you live in the same household with someone who directly qualifies for a particular Credit Union account, then you are eligible for an account too. While all Credit Union have some type of requirement to join, each Credit Union is different. Sometimes all you need to do is live, work, worship or volunteer in the neighborhood that the Credit Union serves.

Money at a Credit Union is more at risk

Credit Unions are behind on technology

The Credit Union industry has come a long way from the antiquated style of banking that they were once known for. Nowadays, the technology that Credit Unions use is just as advanced as that of Traditional Banks. Most Credit Unions have online banking options and features such as mobile check deposits, smart chip readers on cards and apps for cell phones.

I like banking at the Traditional Banks knowing that I can access my money at any ATM at any time. I assumed you could only get money from a Credit Union’s ATM. In fact, most Credit Unions have a large participating network of ATM’s that are free of charge to use.

If you loved this, you may love these articles on Investing

Click here to go back to the blog
Investing

5 Retirement Accounts You Should Know About

How To Save More Money & Still Enjoy Life

Why We’re About to BLOW Our Emergency Savings