5 Retirement Accounts You Should Know About 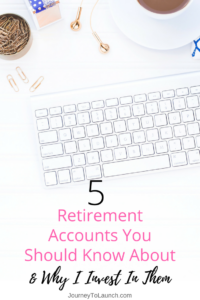 Early in my career, I had no idea how important investing in retirement accounts were to building real wealth and securing my future. I was only concerned with the money I got in that moment. After all, I was told that the money I contributed to my retirement accounts couldn’t be accessed without penalty until I was 59 years old (which is not entirely true). I thought, who the hell cares about what happens when I’m 60 years old?

The Jamila of the present moment was not at all concerned about the Jamila 40 years from now. The old Jamila will figure it out I thought.

Here’s the list of the 5 retirement accounts that we invest in now, that you should know about too:

These are the simplest forms of retirement plans given to you through your job. The money is withheld through payroll deduction, and you can save up to $18,000 of your pretax income in 2017 ($24,000 if you are 50 or older). If you leave your job, you can roll the account over into a new employer’s 401(k) or your own IRA.

A 401(k) is usually offered by a for-profit company, while teachers and other employees of nonprofits typically have access to a 403(b) instead. You can’t take out money from these accounts without paying a penalty before the age of 59 1/2 years old.

Similar to the 403(b) plan, it is typically offered to state and local government workers. The 457 plan is tax deferred while you are employed by the not for profit, but when you leave, you cannot roll it to an IRA. You can take it before the age of 59 1/2  years old without paying any penalties. You would just pay the tax.

The two major things that the 401(k), 403(b) & 457 plans have in common is that you; avoid paying taxes on what you contribute to the funds now but will pay taxes when you withdraw the funds in retirement and you can have the contributions automatically withheld from your paycheck, making the process of saving seamless.

If you are a state or local government worker, it’s possible that you can contribute to BOTH the 403(b) plan and a 457 Plan at the same time. That means you can save up to $36K a year in these pre-tax accounts.

The beauty of the 457 Plan is that if you are on a path to early retirement or leave your job, you can access your money without paying any penalties. This makes the 457 Plan a great investment vehicle for early retirees!

Since I work for a for-profit company, I invest in their 401K, and my company matches me up to a certain percentage. My husband is a NYC teacher and has the opportunity to invest in a 403(b) plan AND a 457 plan. We are able to hyper accelerate growth in our pre-tax retirement accounts by contributing to all 3 of these plans.

Unlike the 401(k), 403(b) & 457 Plans where your contributions are held through payroll deduction, you typically contribute to a Traditional IRA through an investment company and deduct the IRA contribution from your taxable income. Anyone can contribute up to $5,500 a year to an IRA, or $6,500 if you’re over 50. The money grows tax-free. You can contribute to both an IRA and a 401(k), but if you’re covered by a retirement plan at work, you can’t deduct your IRA contributions from your taxable income if you earn more than $71,000 annually (for single filers) or $118,000 (married filing jointly). When you withdraw the money in retirement, you will pay taxes.

A Roth IRA is funded with after-tax dollars and you get no tax deduction for your contribution. The money you earn grows tax-free, and you pay no tax on withdrawals after you reach 59 1/2 years old. You can withdraw the amount you contributed (but not your earnings/return) at any time without penalty or no taxes due as long a the contributions have been in the account for 5 years. The 2017 income contribution limits to a Roth IRA is $131,000 if you’re single or $193,000 if you’re married filing jointly.

Having a combination of these retirement accounts is key to having a diversified portfolio and creating wealth.

I typically say everything happens for a reason and the mistakes you make ultimately lead you to where you want to be.  But missing out on the opportunity to invest earlier in my working career is absolutely something I would go back and change in a heartbeat.

If I would’ve known then what I know now, I would have understood the importance of compounding interest and tax free investment growth.

Even if you are older, it’s not too late to start investing now. As I mentioned earlier, we didn’t start aggressively investing in these accounts until we were in our 30’s.

Do you currently contribute to your retirement? If so, what accounts do you invest in? Comment below

If you loved this, you may love these articles on Budgeting / Investing

Click here to go back to the blog
Budgeting, Guests with Podcasts

Using Debt as a Tool

Money Resolution You Can Stick To In The New Year